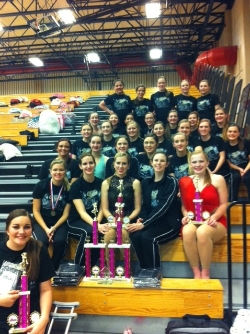 The MWHS Fillies Dance Team and Officers won Sweepstakes and Judges award at their competition this past weekend.

Officers won showmanship and choreography awards for Lyrical, Jazz, and Modern and a technique award for their Lyrical.

The team won a Showmanship award for all their dances Pom, Kick, Military, and Jazz and a choreography award for kick and Military and Technique award for Military.

The duet of Jenna and Jordan Kmiec won a division 1 rating.